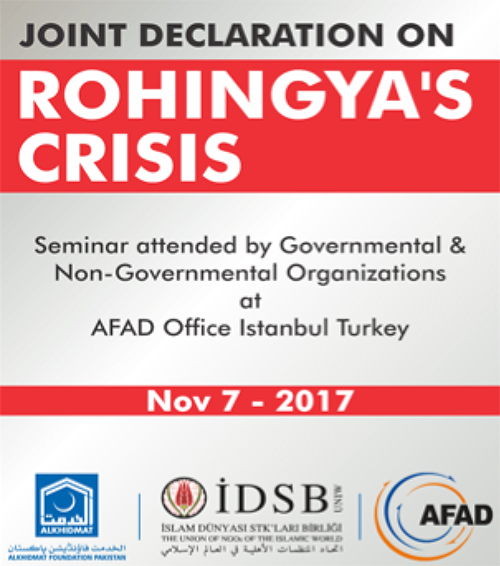 The Rohingya Muslims, who comprise 5% of the population in Burma, are the innocent victims of genocide and ethnic cleansing.

Despite constituting a considerable percentage of the Burmese population, they are deprived of citizenship, let alone to live as Muslims and raise their children according to the rules of Islam.

They do not possess any weapons, yet they are attacked by soldiers equipped with fatal weapons employing disproportionate force.

Unfortunately, children, girls, mothers, women, the old and infirmed are not spared of this inhuman massacre.

The Rohingyas have been deprived of their basic human rights and freedom which is enshrined in the “Universal Human Rights Declaration” signed by all UN member states.

We, the participant NGOs of the Consultation Meeting co-hosted by AFAD (Disaster and Emergency Management Authority, Turkey), UNIW (Union of NGOs in the Muslim World) and AKFP (Al-Khidmat Foundation, Pakistan), hereby pledge to help the oppressed Rohingya people, towards ending the atrocities perpetrated by the Burmese government, racist and religious elements in the Burmese society.

We, the participants of the Rohingya Consultation Meeting hereby: 1. Urge the Burmese government to protect the human lives on their soils, whether citizens or otherwise and to accept the right of return of the Rohingya people to Burma.

2. Urge the Burmese government to allow aid and relief workers to be immediately dispatched to the areas affected by the conflict, to assume their work without fear of violence.

3. Urge the world community and its international human rights agencies to intervene urgently to protect the lives and properties of the Rohingyas in Burma and elsewhere.

4. Applaud the Bangladesh and Malaysian governments for providing much needed refuge to the Rohingya refugees and to the Turkish government for financial and humanitarian support.

5. Appeal to the government of Bangladesh to permit and facilitate humanitarian and relief NGOs to operate in Bangladesh until the crisis is stabilized or solved.

6. Request all members of the OIC to lobby for the right of return of the Rohingyas on the various international political platforms and actively support and fund the livelihood of the Rohingyas in the refugee camps in Bangladesh.

7. Appeal to all international agencies of the UN, relief and humanitarian NGOs to provide humanitarian relief to the Rohingya refugees in Bangladesh, inside the Rakhine State and elsewhere in Burma.

8. Urge the mainstream and alternative media create awareness of the massacre in Burma and the plight of the Rohingya people as a humanitarian issue and not a religious one.

9. Urge the educational institutions to undertake awareness campaigns and empower the youth to raise their voices on the Rohingya issue on social media.

10. Urge all participating NGOs to cooperate, coordinate and synergize their resources to ensure optimal outcomes to the Rohingya humanitarian crisis and continue to raise funds at the national and international level.

11. Urge all participating NGOs to strengthen their relationship with local NGOs currently working in Bangladesh and Burma.